Necessity or nice to have?

Electric Gates were once the preserve of Hollywood, or at least those were my thoughts when I was a kid watching the US TV detective shows, back in the days when we only had three TV channels. Columbo would be working out how to get past some formidable gates and find his next clues in a Beverly Hills Mansion.

Here in the British Isles though, intruder alarms arrived like a whirling dervish in the late 80’s and proceeded to dominate security protection in those latter years of the last century. This was followed by the Chinese revolution which has subsequently thrust CCTV (once the domain of degree educated electronic experts) into the hands of everyman.

Yet now, we fast forward into the “Teenies” (just think in 10 weeks’ time, we will be entering the roaring 20’s) and the proliferation of gate installations. Like all ‘gold rushes’ caution has been thrown to the wind and every DIY’er and their dog are installing gates. Many of them badly.

The Order of the Day – Quality and Safety!

There is a skill and knowledge that goes in to installing gates that is often overlooked.  Powered gates are essentially machines and like guns in the wrong hands are dangerous.  The number of calls we receive week in, week out from customers who can’t get the original installer back on site is testament to this.

The DHF has long advocated the need to bring a sustained level of quality & safety to gate installations. Slowly and surely a growing number of companies have climbed on board. If you install gates regularly and plan to be sticking around for a while (we are 37+years old!) then you start to appreciate the finer nuances of gate installations, and yes, they can seriously maim and even kill. 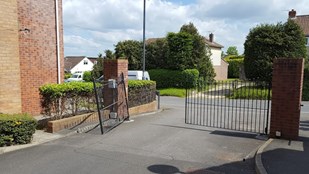 I can only speak for myself but I have a conscience. I don’t want a serious injury or fatality caused by one of our installations. Yes I accept in business you need to make a profit to survive but not at the expense of installing a lot of dangerous, unreliable gate systems. There are no short cuts.

Customers will naturally get multiple quotes and amongst them will be specifications that have no regards for safety and no surprises, they are cheaper!  Well they will be. Nice big reducing hinge gaps to chop an arm off (surprised it wasn’t used as a medieval tool of torture), cram everything into the tiny control box the manufacturers supply – next engineers arrives, takes the control box cover off and not only does a birds nest of cabling fall out so too does an exposed 230v live connection which naturally has no RCD protection increasing the likelihood of an electric shock and so on…

Gate safety is firmly under the long arm of the law. To highlight this point, there is a Gate Engineer currently in prison due to negligence and a resulting guilty manslaughter charge.  If you take a short cut on an installation and a major accident happens, the H&S Executive, the police and of course the lawyers will be arriving at your door. You will be looking at both criminal and civil charges.  We will always advise clients on what safety measures are required but we have to also be strong enough to walk away from a job if the risk is too high.  No one can say that there will never be an accident with a gate system but as the installer if your name is on that one time when things go wrong badly, you can be certain of the consequences and they are not good;- stress, cost, guilty conscience, even prison.

This is why the DHF Gate Safety Month is so important. It is the opportunity for our UK wide industry to lead a united concerted effort to remind the wider world at large, of the dangers involved with Gate Automation. The best way to resolve any issue is through education. The more publicity that can be made to highlight the dangers of powered gates, the more recognition the general public will begin to acknowledge. Yes, it can be a slow process but that is even more reason to wholly support the DHF in their gate safety awareness campaign. Slowly but surely we are now starting to have an industry that we can be proud of.

About the Author – Max Smith
From studying for a Politics degree, Max took the less than obvious path into the environs of Security as a Locksmith back in 1985! Thirty plus years later, it’s a journey that has seen the achievement of NSI Gold accreditation for Intruder Alarms, Access Control & CCTV, plus the introduction of a sister company specialising in Gate Automation Solutions. With a wealth of both Engineering & Management experience Max has an active interest in the evolution of the Security Industry and its future direction. 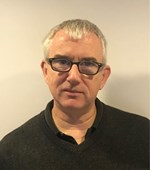 To assess your security solution requirements, we offer a free site survey in the South East of the UK. To book simply complete the form here, call us on 0118 978 3381 or email us at info@scssecure.co.uk

Necessity or nice to have?